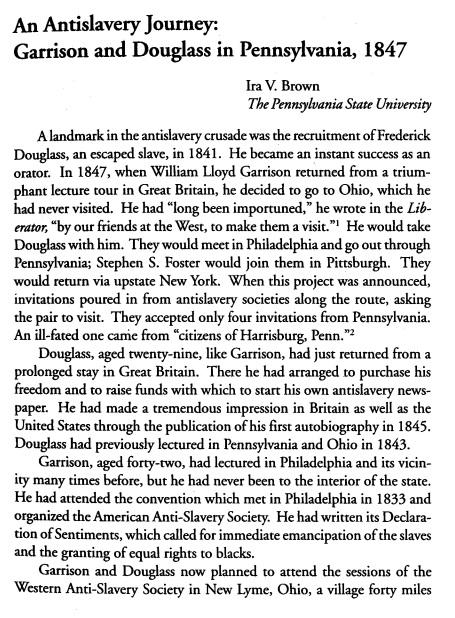 An Antislavery Journey: Garrison and Douglass in Pennsylvania, 1847

EXCERPT: “What had Garrison and Douglass accomplished on their four stops in Pennsylvania on their way to Ohio? The answer is probably “not much.” In Norristown and Philadelphia they had addressed several hundred members of a well-established antislavery society and a small group of blacks. In Harrisburg their meeting had been broken up by a group of rowdies. In Pittsburgh they may have made some new converts. They had held two meetings in New Brighton, a village near the western border of the state. In Ohio, on the other hand, they spoke at eighteen communities. The Western Reserve was a hotbed of abolitionism. At New Lyme, Oberlin, and Salem they addressed audiences of several thousand” (Brown, 548).

Note: A handwritten letter by Frederick Douglass referencing the “canal boat to Youngstown, Ohio” journey (Brown, 547) is on display at the Little Beaver Historical Society.